Article published in online and print paper at Business Line ( The Hindu ) on 12th May 2020 written by Mr Rahul Wadke given below as it is with original link.

About 60% of crop decimated in 10 days; farmers blame disease on seed companies.

An unidentified virus is attacking tomato crops in large parts of Maharashtra. In the districts of Ahmednagar, Pune and Nashik, about 60 per cent of the crop has been decimated in the last 10 days.
Experts at the Mahatma Phule Krishi Vidyapeeth at Rahuri, Ahmednagar, which is the local agriculture university, are studying the outbreak along with State government officials but the virus remains unidentified. The despondent farmers are now pointing fingers at seed companies — including an MNC — for allegedly selling diseased seeds.

Ajit Navale, General Secretary (Maharashtra) of the All India Kisan Sabha (AIKS), told BusinessLine that the damage to the crop has been extensive. The plant leaves are drying up and the ripened tomatoes are developing irregular shapes and losing their sap. The crop ready for harvesting has been lost to the viral outbreak.

This destructive wave is similar in its intensity to the 2017 pink bollworm attack on cotton. Plant experts have expressed multiple opinions about the outbreak but they have not been able to identify the type of virus affecting the crop, he said.
AIKS is an independent organisation fighting for farmer rights, but several CPI (M) leaders hold a leadership position in the organisation.

Due to the lockdown, the samples of the diseased tomatoes have not reached national laboratories for further analysis. Seed companies have also analyzed the samples but they are claiming that the viral attack is not very significant, said Navale.

He added that seed company officials, in off-the-record conversations, are saying that the cucumber mosaic virus could have affected the tomato crop. In the past, outbreaks of cucumber mosaic virus have not caused widespread damage. Farmers fear that if this viral attack is not controlled then it could spread to other crops. They also want advice on precautionary steps to be taken before replanting the crop, so that the crops are not affected all over again.

Tomatoes are widely used across cuisines all over the country. Due to the massive demand, the crop is planted and harvested throughout the year. The plant is ready for harvest after two months of sowing and the tomatoes can be plucked up to four times a year.

Tomato farmer Suresh Navale (not related to Ajit Navale) from Unchakhadak village in Akole taluk of Ahmednagar district said that his crop, planted in early March over 2.25 acres, has been destroyed. Usually, in second plucking, 150 crates are harvested but this time it did not reach even 50 crates of edible tomatoes.

In healthy and unrefrigerated tomato, decomposition typically starts after four days, but those plucked recently are turning black within 12 hours, he said. “I fear that such tomatoes could create health issues for the consumers,” he added.
A scientist at the Mahatma Phule Krishi Vidyapeeth said an analysis of the tomato samples is underway but conclusions have not been reached. 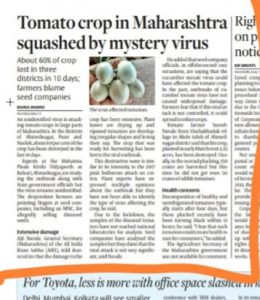 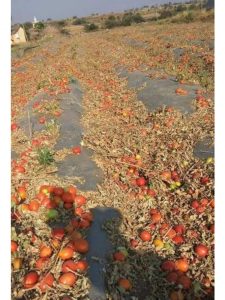 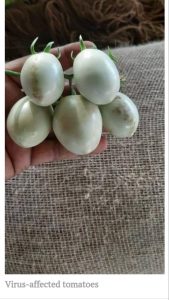